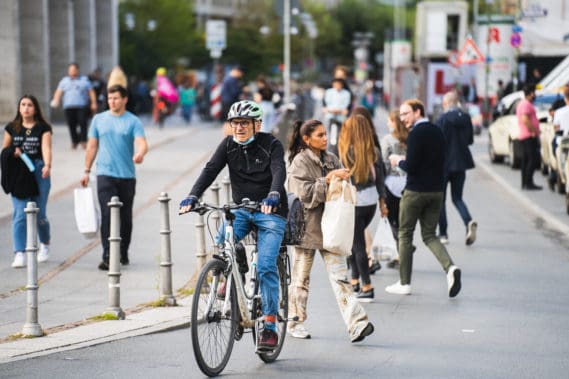 A sudden knock at her bedroom door startled *Harper. She opened it to find one of her housemates, a Ukrainian, eager to have a conversation with her. His face was pinched with worry as he expressed fears for his family amidst Russia’s aggressive threats of invasion. Harper wasn’t surprised. For months now, her housemates had been coming to her with their concerns, disappointments and questions about life’s ultimate meaning.

When Harper, a GEM worker, first moved to this large, bustling European city, she learned that she would have to share a home with total strangers because of a housing crunch. She wasn’t sure how she felt about that. This was an extremely secular city, known for an “anything goes” ethos. Harper already felt vulnerable as a foreigner. She would have preferred to be surrounded by like-minded people in the beginning stages of her adjustment to a new environment.

The city teemed with thousands of young adults seeking education and career advancement. Most of them spoke English as a second language. As their numbers outpaced the housing options, they searched online for shared living space. In Harper’s house, each person had their own bedroom while sharing a common kitchen, living and dining area. Half of Harper’s nine housemates were international, while half came from her host country.

Harper had no choice but to accept the arrangement. She gathered her courage, settled in and focused on learning the local language. She went about living her life as the only Christian among unbelievers. As with any relationship, it took some time to build up trust between herself and those with whom she lived.

It soon became apparent that Harper’s lifestyle contrasted sharply with that of her housemates. The city had a renowned club scene and a “do whatever makes you happy” philosophy. Young, single adults worked hard during the day and partied hard at night. They entered into fleeting relationships fueled by alcohol and casual sex.

As Harper’s housemates noticed her conservative lifestyle, they seemed confused. “Why are you here?” they asked her. “You don’t seem to fit with the vibe of this city! How is it you live here and still maintain a sense of purity?” Jaded by their experiences in a cutthroat work environment and a hook-up culture, they probed, “How is it you live here and stay so kind and generous?”

These questions led to gospel conversations. No one could have been more surprised by that than Harper! As an introvert, out of her comfort zone, she would never have made this type of shared housing her first choice. Yet now her roommates were coming to her with their deepest thoughts and questions. Their fleeting romantic relationships left them feeling used and empty. “I want something more, something authentic and lasting,” they confided to Harper. “But how do I find something like that?”

When Harper moved into the house, she’d assumed those she lived with would be reserved and closed off. Instead, they sensed in her a kindness and compassion that invited them to open up and share deeply. Where Harper thought she would merely be biding her time until “real” ministry started, a flourishing ministry sprang up.

Eventually, a couple of Harper’s housemates approached her and said, “We’d really like to come to church with you and see what all this is about.”

“This is a huge testimony to the movement of the Holy Spirit,” says Harper. “I’ve been really blown away! The past few months have shown me that just living out our lives as believers attracts people to the gospel. I would never have imagined that my greatest ministry opportunity would be in my own house, but God has continually shown that my presence here is purposeful and that he is trying to reveal himself to my roommates through me. For that, I am truly grateful.”

Harper’s housemates continue to come to her to talk about issues within their families, dating relationships, and questions regarding faith. Most of them have only a nominal exposure to Christianity. They feel comfortable confiding in Harper. She strives to create a safe environment in which they can speak honestly.

“Before this,” she says, “I was on a church staff, and our ministry revolved around events. Now, my ministry—a ministry I didn’t even think I would have while still in the process of language learning—revolves around relationships. My whole perception of ministry has changed since I moved into shared housing. I now see it as a way of life rather than a series of events and services. Ministry is relational; it should be an ongoing, natural part of our lives as we live out our faith.”