Fatima had only recently come to Christ, but when her church held an evangelism event, she decided to take part. On one level, she knew this would be a good opportunity to learn how to share her testimony. On another level, she felt nervous as she stood in the train station, handing out gospel tracts. If people just pass me by, she thought, that will be okay. I don’t really know what to say anyway.

When a petite, dark-skinned woman pushing a stroller came along, her eyes lit up when Fatima held out the gospel tract. “Is this about Jesus?” she inquired enthusiastically. “Because if it is, I’m interested. My name is Melanie.” 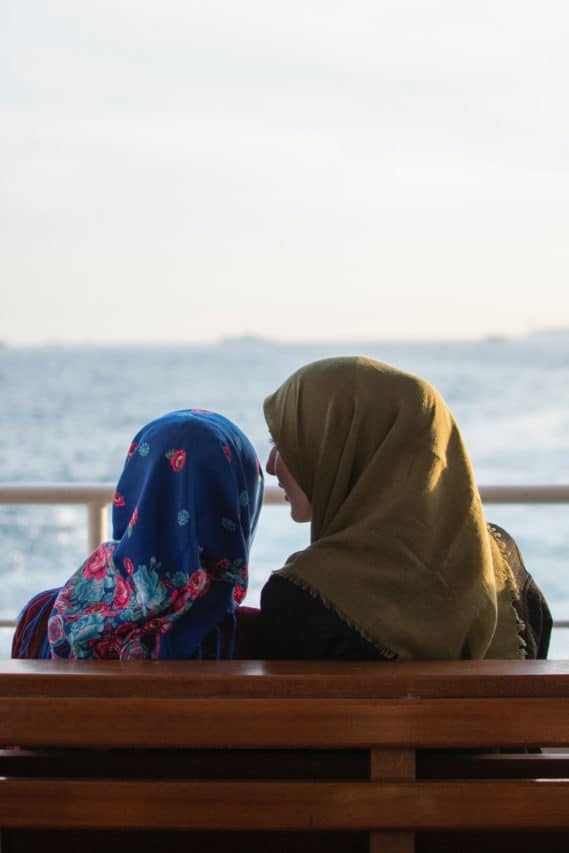 Fatima’s mouth almost dropped open. Quickly she gathered her courage and began answering Melanie’s questions as best she could. It didn’t take long for the two to find some things in common. Both had immigrated to France from French-speaking countries – Fatima from North Africa and Melanie from South America. Both enjoyed having impeccably manicured nails. And most significantly, both had been searching for a relationship with God. GEM global worker Suzanne* had led Fatima to Christ.

Now it was time for Fatima to do her part in leading Melanie to Christ, whether or not she felt ready to do so.

I wish Suzanne would hurry and get back from America, thought Fatima as she fielded Melanie’s relentless questions. As a new Christian, it had never been her intention to actually disciple anyone; she had only hoped to meet some women for Suzanne to disciple! But Suzanne was gone for the summer, and Fatima sensed there was no time to waste. She invited Melanie to church. Throughout the next weeks, Melanie bombarded Fatima with more questions about faith in Jesus. Fatima did her best to answer out of her own experience and her limited but growing knowledge of the Bible.

When Suzanne finally returned to France, she was overjoyed to meet Melanie. This second-generation disciple was ready to receive Jesus as her Savior and Suzanne had the privilege of witnessing her pray for salvation. Not long before, Fatima herself had come to Christ, and now she had passed on her faith to another! Suzanne enjoyed seeing the discipleship multiplication process playing out before her very eyes.

The three young women began meeting together regularly to study the Bible. Suzanne chose a curriculum that she and Fatima had already completed—an overview of the Bible and its overarching message of salvation. It wouldn’t hurt Fatima to review it. It also meant Fatima could act as a co-leader, preparing her to step in as actual leader when the next person came along who needed to be discipled.

It wasn’t always easy for Melanie, a mother of two, to find the time to meet with Fatima and Suzanne. But she was eager to learn, so she did her best.

Juggling her children and all their accoutrements—a daughter of five, an energetic toddler son with a charming poof of curly black hair, a purse, stroller and diaper bag—she seldom failed to show up. Thankfully, the father of her youngest child, with whom she lived and who was a Muslim, had no objection to his wife’s newfound faith.

Melanie saw her prayers answered when a hard-to-find space became available for her son in a local daycare. Now she could go through training to work in retail to help support her family. She also shared with Fatima and Suzanne that she had been raised as a Jehovah’s Witness in French Guiana. “I never felt comfortable with it,” she confided. “I knew there was something missing.”

Listening to Melanie share about her background, it became evident to Suzanne that the Holy Spirit had been preparing the young woman’s heart to meet Jesus for a long time.

God had prepared Fatima’s heart in a similar way! Suzanne marveled at how he had brought these young women into her life, giving her the privilege of stepping in during the last stages of their spiritual journey to Jesus.

Now that they had found the Lord, a whole new journey was beginning for them, as his followers.

As she watched Fatima take her first, faltering steps at shepherding a new believer, Suzanne couldn’t help but think of how appropriate the French term “accompagner” was for this process. Among French Christians, the word connoted discipleship. Yet, its literal translation, “to accompany,” so much more eloquently described what was now taking place between herself, Fatima and Melanie.

To accompany someone means to meet them where they are, joining them for the journey, helping them along the way. Fatima had already journeyed quite some distance when Suzanne came along. God had led Suzanne to Fatima at just the right moment, when she needed to be accompanied. Now, God had led Fatima to Melanie, who had been on a journey of her own.

What a privilege, thought Suzanne, to be here in France to accompany both these women on their individual journeys with Jesus!

To read a past story by Jenny about Fatima’s conversion through Suzanne’s investment, click here.